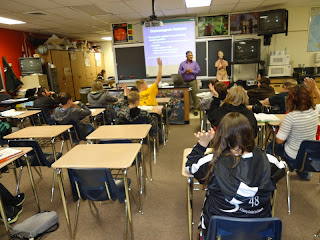 Botany faculty member and WyomingView coordinator Ramesh Sivanpillai described the differences in the interaction of earth surface features with EMR, and how those interactions result in their appearances or colors.  Students learned the uses of images collected by satellites and airplanes for monitoring the effects of beetle attacks on pine trees, deforestation, crop growth, and changes in the surface areas of lakes and reservoirs.  Mr. Whitman commented that the presentation helped “students understand the use of different electromagnetic waves for practical applications.” 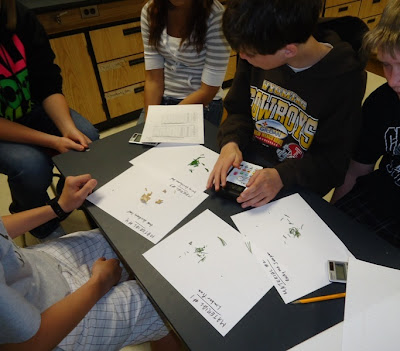 In the lab, students working in teams used ALTA ™ Spectrometers to measure spectral reflectance in 10 different regions of EMR.  Next, they calculated percent reflectance values, which were then plotted against wavelength to generate the spectral signature for each leaf.

Analyses of these signatures led the students to conclude that the spectral signature of each leaf was distinct. 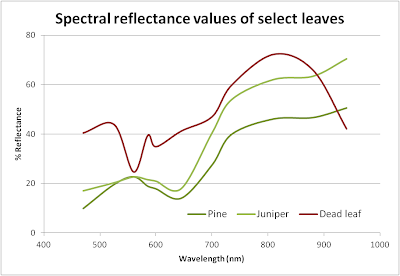 Hands-on lab component for measuring and calculating “percent reflectance of the four types of leaves at different wavelengths, actively engaged the students the entire lab time” Mr. Whitman said.  Sivanpillai explained the differences in the spectral signatures of different earth surface features and remote sensing scientists rely on these signatures for mapping those features.

This educational outreach activity was conducted as part of AmericaView’s Earth Observation Day activities aimed at introducing teachers and students to remote sensing science and applications.
Posted by Ramesh Sivanpillai No comments:

On, October 14, 2010, Jessie Steel, a machine operator for an excavation company, unearthed bones of a Columbian Mammoth in a reservoir near Snowmass Village, Colorado. The news of the mammoth discovery captivated the locals in the ski resort towns of Snowmass and nearby Aspen. The buzz of the area shifted seemingly overnight from gossip about celebrities, luxury homes, and skiing to talk of an unimaginable world filled with huge animals such as mammoths, mastodons, and sloths that roamed the same landscape. Within days after the initial mammoth bones were unearthed, construction workers continued to find more bones including tusks, limb bones, vertebrae, jaws, and teeth of ice age animals at an astonishing rate. Reports trickled out from the construction site about the unusual preservation of the bones and plant material found in nearly pristine condition—remarkably the plant material still contained its green waxy cuticle.

The news of the discovery rapidly spread across Colorado like wildfire. The Denver Museum of Nature and Science (DMNS) stepped in as the lead research group behind the leadership of Kirk Johnson and Ian Miller (curators of paleontology at the DMNS). Ian, who happens to be my older brother, immediately called me up and told me to clear my calendar for November. He said “Dane, you better start packing, next week we’re going to be excavating mammoths and mastodons.” My brother always seems to call me up when there is either a cool fossil site to excavate or going skiing—he always wants his brothers around. I have worked with my brother for more than 10 years collecting fossil plants in Washington, Wyoming, Utah, and Colorado. Prior to the Snowmass dig I had worked at the DMNS as a research assistant and the Smithsonian Institution National Museum of Natural History as a lab manager/curatorial assistant, so it wasn’t as if I was jumping into field work for the first time. I was asked to do several duties on the Snowmass site beyond just collecting bones and plant material: I led volunteers, assisted research scientists, and labeled specimens. My most dangerous job was running alongside the blade of massive D6 bulldozers moving at nearly full speed as I looked for bones coming out of the mud.

My first full day on site blew me away. The site was nothing I had imagined or was really prepared for: working alongside massive heavy machinery, running through three to four feet of cold mud, and tripping over fossils literally everywhere. With every pass of the bulldozers, more bones were unearthed as the site shifted from a couple animals to dozens of animals. The site truly was an emergency room, treating the critically injured (those that were badly damaged by the heavy machinery) first, and triaging the rest. No one had any idea how large this story would become, or knew how it would change Snowmass Village, Colorado. We did know we were a part of history, something truly special.

The find that is etched in my mind forever is a mammoth jaw I discovered. I had come around the side of the portapotty, an area the Museum had originally deemed to be void of fossils in the upper clay layer. I was curious to see what the excavator was digging when I noticed a large mammoth jaw sticking out of the clay. I immediately had the operator stop what he was doing, and ran as fast as I could to get a vertebrate paleontologist to verify my discovery. My brother Ian insists that I was possessed by mastodon spirits. This is his only explanation why I was able to find so many bones. Who knows, maybe I was!

In the spring of 2011, the Denver Museum organized a highly structured field operation to hand dig the bones where the toe of the dam for new reservoir would eventually be placed. In eight weeks of digging, and with the help of nearly 200 Museum volunteers, we dug up nearly 6,000 bones. I had the privilege of leading a team of 10-12 volunteers over the eight weeks, digging, mapping, and collecting bones and plant material. The Museum also brought in 40 scientists who specialize in Pleistocene and Quaternary time to begin bringing all the science together. By mid-spring a team of scientists from the US Geological Survey (USGS) in Lakewood, Colorado, were able to determine radiocarbon dates from a piece of wood as old as 39,500 years. Other dating techniques have constrained the age of the lake between 130,000 to 39,500 years old.

Why is this site so special?

As a graduate student in the Botany Department at University of Wyoming pursuing a Masters in Botany with Dr. Stephen Jackson, I've been fortunate enough to continue to work on the Snowmass project. My Master’s thesis is focused on the conifer cones and needles collected at the Snowmass site. I will be applying various morphometric techniques, taxonomy, and aDNA molecular analysis to help add to our understanding of Pleistocene conifer forests in the Rocky Mountains. 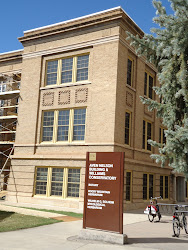 The Department of Botany promotes modern plant biology by engaging in forward-looking teaching and research, with strengths in evolution, systematics and ecology.

More details on About us